“Your mother should’ve aborted you!” 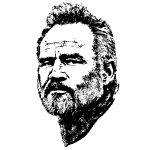 Off to another Freedom Rally to snap some pics. This time at Century Gardens here in downtown Calgary. The street is littered with folks so it was a bit of a wait to pull in my parking lot as a family of four make their way past the mouth of it to attend the event with signs in hand. The youngest child had a sign concerning vaccines and motherhood. Couldn’t make it out.

The lot seemed to have room as I passed but now that I’m inside there are just one and a half spots left so I tried my best to take one but leave 3/4. Folks are rushing to get their ticket from a kiosk as I try to login into the phone app.

“Do I need a mask?” I ask myself. Not that I’m afraid of COVID but crazies. There was an issue last rally … but that’s a different story. Ok, finally on my way when I see a couple walking away from the park where the event is.

“How DARE they do this in .. in .. in a neighborhood?!?!?!” says the shorter dark-haired gentleman as he continues through this commercial district.

I turn to look because this guy was in an altered state. Recognizing that I was heading the other direction the man’s much taller and much heavier husband turns to me. Somebody must pay for this outrage. “YOUR MOTHER SHOULD’VE ABORTED YOOOOOUUU!”

I guess that was the most offensive thing that this character could think to yell at the next random person who he assumed must’ve been one of those bible-thumping, science deniers the news told him were destroying his planet.

“Yep, going back for that mask,” I muttered to myself relenting to the realities of this place.

Typical kind of crowd – a mix of middle-aged men and concerning soccer moms. Typical speeches – “Kenney is evil”, the “jab is dangerous”, “we’re under siege.”

One highlight was Zane Novak as a highlighted speaker. A candidate for mayor this year who stated that it was difficult for him to decide to attend but he felt compelled to. Not compelled because he was an “anti-vaxxer” but because he has become increasingly concerned about the attacks on civil liberties.

Another highlight was Rob Anders working a clipboard near the “Alberta Statehood” booth. Anders was a Member of Parliament from the Reform then Canadian Alliance parties. He became famous for calling Nelson Mandela a terrorist. Needless to say they ran him out of office on a rail.